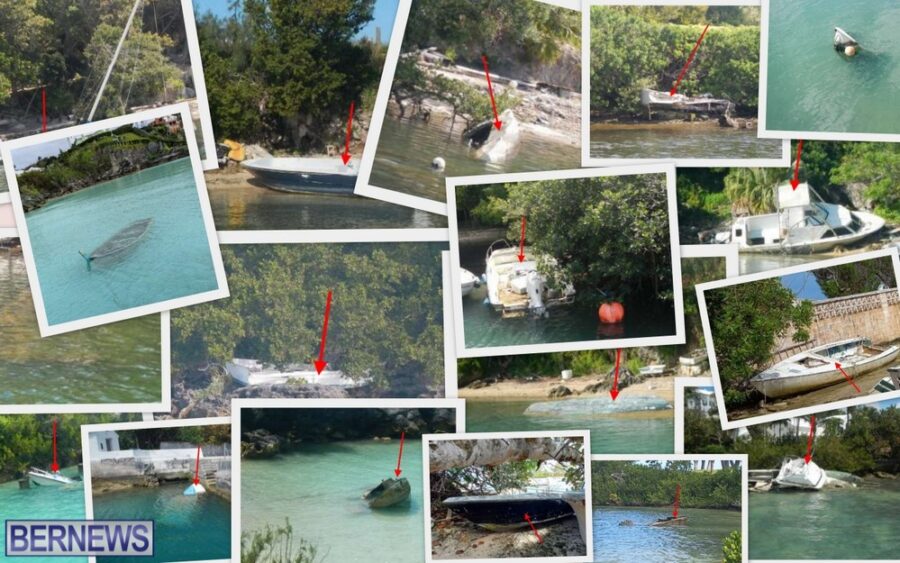 31 abandoned and derelict boats –  located in areas including Mullet Bay, Ferry Reach, Coney Island, Stovell Bay and more –  will be “removed and discarded,” the Government has advised.

These 31 boats are addition to the notices earlier this year about 54 abandoned vessels, with the Government having previously issued two notices of boats set to be removed, with the first notice detailing 37 boats, and the second notice listing 17 boats, and some of those boats from the first two notices have been removed

Earlier this month a Ministry of Transport spokesperson said, “The joint programme to remove the vessels is a partnership between Government and Keep Bermuda Beautiful [KBB] following a Memorandum of Understanding [MOU] signed by the Minister of Transport.

“The additional 31 abandoned and derelict are unsightly and present a hazard to other motoring vessels. The vessels are located in the Mullet bay entrance, Ferry Reach, Coney Island and Ducks Puddle [St George’s], Mills Creek and Stovell Bay, Spanish Point [Pembroke] and Somerset areas.

Collage made from some of the images contained in the notice, which you can read in full here

Keep Bermuda Beautiful [KBB] previously noted that they have actually “identified more than 100 abandoned vessels on moorings, on the seafloor, along coastlines and in our bays.”

“Abandoned boats and marine wrecks have been a blight on Bermuda’s beautiful coastline for years. Not only are they a danger to boaters and swimmers, but they are also an environmental hazard leaking fuel and oil into our pristine waters,” KBB said.

“KBB has received funding from two anonymous donors and the Argo Group that will cover the removal, remediation and safe disposal of the wrecks and their hazardous contents including fuel, oil and batteries.”