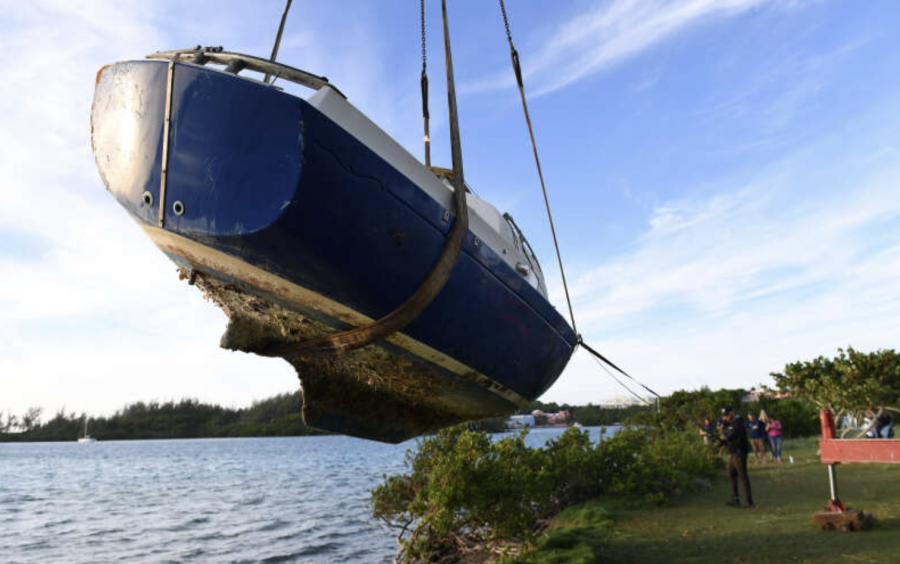 A sailboat that washed ashore during a recent hurricane has been removed as part of a collaborative effort to clean up the island’s inshore waters.

The vessel has been left abandoned at Stone Crusher Corner on Kindley Field Road, St George’s.

Environmental charity Keep Bermuda Beautiful launched the Abandoned Boats Project in partnership with the Government in January with the initial aim of taking 54 boats out of the water and shorelines.

The charity raised $115,000 to fund the project designed to conserve the marine environment and remove hazards to shipping activity. So far, 35 vessels have been removed with the rest hoped to be removed by the end of the year. Fundraising efforts are now beginning on retrieving a further 31 boats.

Amy Shillingford, board member for KBB and the lead for the Abandoned Boats Projects, said every effort is made to contact the owners of the boats before removing them and that a notice is posted in the Official Gazette to alert the public about removal efforts. However in the absence of someone coming forward, the Government can take ownership of the boats and dispose of them.

Ms Shillingford said: “The boat on Kindley Field Road was ticketed by Parks as it is in a national park area. No one came to remove it so they asked KBB to remove it as part of the project.

“We are waiting on quotes from contractors to see how much it will cost to clean up the next 31 boats but based on the previous costs, it will be at least $70,000.”

Boats may also be removed under the Merchant Shipping Act 2002 if vessels cause a hazard.

Ms Shillingford said the removal of abandoned boats, which can leak hazardous material into the ocean, harming wildlife and also causing obstruction to passing marine traffic, is only a short-term solution and more needs to be done.

As part of the next phase of the project, KBB has teamed up with the Bermuda Environmental Sustainability Taskforce to research long-term solutions to the problem and draw up recommendations to submit to the Government.

Ms Shillingford added: “We are talking to insurance companies, government bodies, looking at legislation as to how we can help the situation. The goal is to come up with recommendations for government to help them solve the problem.

“One issue is that boat insurance is not mandatory so you can buy a boat and drive it with no insurance, it can sink and you have no insurance to remove it. In the last storm, one boat went down in Paradise Lakes and the cost to remove it was quoted as $12,000.

“There could be something like the Motor Insurance Fund where all boat owners pay into a fund regardless of whether they have insurance or not.

“We are also looking at best practice in other jurisdictions.”

Voice of the Seas, a family of environmentalists from Brazil who are sailing the world raising awareness of plastic pollution, attended the removal at Stone Crusher Corner. They will be capturing footage of the removal as part of a project it runs documenting and sharing conservation efforts around the world. Fore more information on the project click here.

For more information about the Abandoned Boat Project contact office@kbb.bm. Donations can be made through KBB here.

Owners of derelict vessels were told they had 30 days from today to take their boats to a legal site.

Alternative locations must be in line with the Merchant Shipping Act 2002, the Marine Board Act 1962, the Marine & Ports Authority (Dumping) Regulations 1967 and other laws.

The list is posted on the Official Gazette online.

Boat owners can come forward and let the ministry dispose of their vessels at no cost by completing a consent form for Marine & Ports, which can be found on the Government’s website.