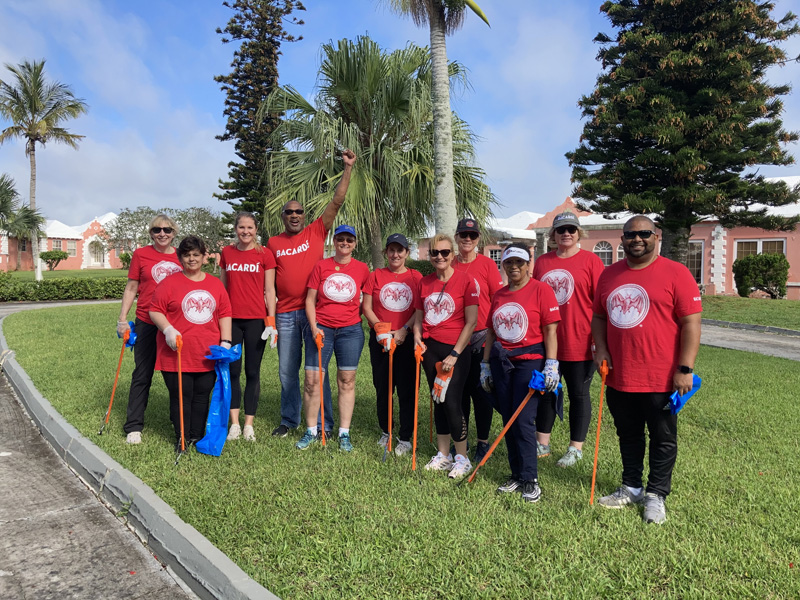 Bacardi has partnered with the Beyond Plastic Bermuda campaign, a joint collaboration between Bermuda Environmental Sustainability Taskforce [BEST] and Keep Bermuda Beautiful [KBB], to educate the local community about the dangers of plastic pollution and encourage actions to reduce single-use plastic on the island.

A spokesperson said, “Family-owned Bacardi Limited continues its fight to eliminate single-use plastic and its latest effort brings it home to its global headquarters in Bermuda. Bacardi has partnered with the Beyond Plastic Bermuda campaign, a joint collaboration between Bermuda Environmental Sustainability Taskforce and Keep Bermuda Beautiful, to educate the local community about the dangers of plastic pollution and encourage actions to reduce single-use plastic on the island.

“As part of its Good Spirited Corporate Responsibility program, and in line with the United Nations Sustainable Development Goals [UNSDGs], Bacardi has set a number of goals to reduce its environmental impact.

“Back in 2016, Bacardi was the first global spirits company to eliminate single-use plastic straws, first internally and then at festivals and events. More recently, the company announced plans to put a 100% biodegradable bottle on shelves by 2023, replacing 80 million plastic bottles equivalent to 3,000 tons of plastic annually. Bacardi also announced plans to eliminate all single-use plastic in secondary packaging and point of sale material by 2023 as well as being 100% plastic free by 2030.”

Douglas Mello, Managing Director of Bacardi’s Bermuda office, said, “At Bacardi, we are committed to leading positive change, both within our business and within our communities.

“Our collaboration with Beyond Plastic Bermuda is another step in our fight against single-use plastic and we hope to inspire our community to choose reusable and sustainable options.”

The spokesperson said, “Through a series of events and calls to action in Bermuda, Bacardi and Beyond Plastic will encourage consumers, customers, and all those looking to make an impact to amplify their efforts using #SNTSUP [Say No to Single-Use Plastic].

“As part of the partnership with Beyond Plastic, Bacardi is conducting a plastic audit of its Bermuda offices and its distributor partners to identify ways to further reduce plastic use. Bacardi will also co-host workshops with local bars and restaurants to offer alternatives to single-use plastic.”

Katie Berry, a spokesperson for Beyond Plastic, said, “The Boards of BEST and KBB are extremely grateful to Bacardi for their “Champions for Change” partnership in support of the Beyond Plastic Campaign.

“Together, we aim to break the plastic wave and support Bermuda’s first steps towards creating a toxic-free circular economy, which starts with you making a choice to say no to single-use plastic.”