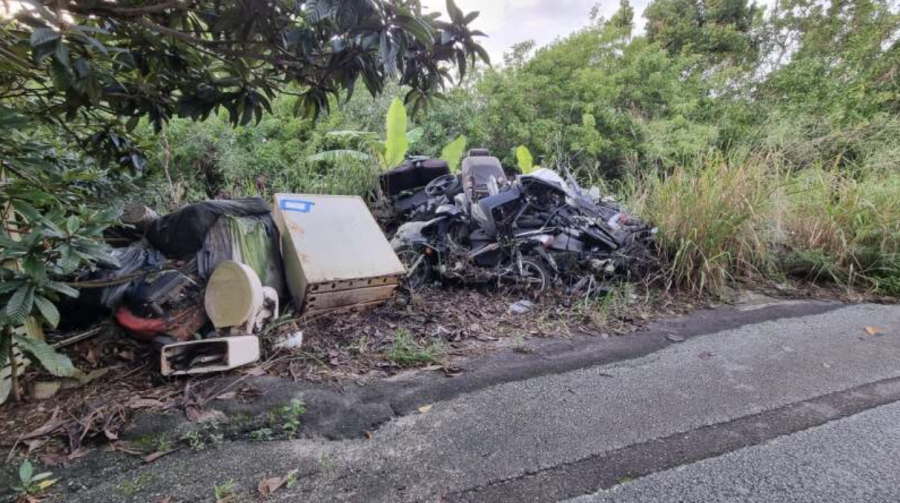 A chaplain has branded illegal dumping on a huge swathe of land as “unforgivable”.

Kevin Santucci was walking in the area with his wife when they stumbled across an area he estimates to be about 70ft by 40ft full of abandoned bikes, car parts, appliances and other trash.

Dr Santucci described the site as “unforgivable” and is now calling on the community to come together to help clean up the mess which is behind the PHC Stadium, near the Railway Trail.

He said: “A couple of weeks ago we were out walking and when we saw it. I said, low and behold – what do we have here?

“The big question is, how long are we going to allow people to just throw their trash on the side of the streets and even in the tracks?

“It is not healthy, neither should it be encouraged – it blew my mind. I don’t know how long it has been there but there are rodents there.

“It is unhealthy for the residents, this stuff will rot and end up in the water ways and it will depreciate the value of the homes in the area. What has happened to our community?

“I believe we can do far better than this in Bermuda.”

Illegal dumping is an offence in Bermuda under the Waste and Litter Control Act 1987.

Offenders are subject to prosecution with a first summary conviction carrying up to a $5,000 fine, and up to a $10,000 fine for subsequent convictions.

Where to put trash

Information on Government’s waste management systems, including which types of trash and materials go to which Government dump facility, can be found at www.gov.bm/garbage-and-recycling.

People can also visit www.kbb.bm to learn more about responsible waste management, or contact us on 799-5142 to get involved and make a difference in helping to Keep Bermuda Beautiful.

“To consistently deliver on our mission, KBB works closely with the Government’s Departments of Waste Management and Parks, along with community organisations, corporate partners and individual volunteers.

“Dumping on private and public land is a systemic issue that continues to plague our beautiful island. Trash piles can be an eyesore and can also pose a hazard to human health and the environment.

“Illegal dumping on public land, such as public docks, parks and roadways, is a punishable offence that can result in significant fines and/or jail time.

“The trash and bulk waste that have been reported at the edge of the railway trail in Warwick will require some investigation before a solution can be proposed.

“KBB will endeavour to work closely with the relevant government departments to determine what next steps may be required to clean up the site and put measures in place to stop this area from continuing to be used as a dumping ground.”

The Royal Gazette has reached out to various government departments to question what can be done about cleaning up the mess.

Dr Santucci, who said he was willing to play his part in cleaning it up, quoted Margaret Mead, an American anthropologist, who said: “We won’t have a society if we destroy the environment.”

He added: “I believe that our duty to the environment should be to keep it as healthy and prosperous as possible because an unspoilt environment points to a creator who delights in the beautiful.

“Again my heart and will is to do all I can to help the people of Bermuda and its environment. May God bless us all to this end.”