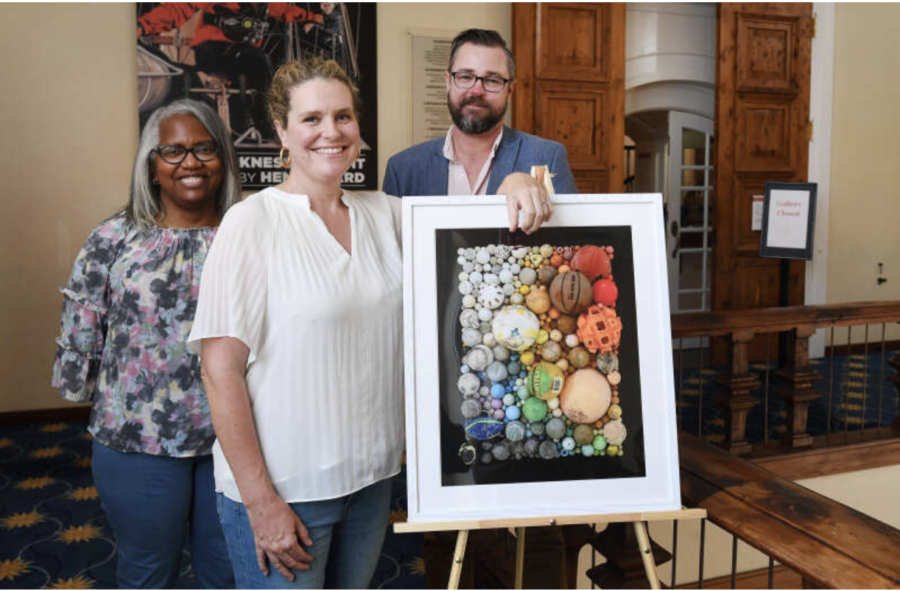 An award-winning photographer has raised thousands of dollars for charity – by “making something beautiful out of something that is pretty ugly”.

Meredith Andrews was commissioned by the Bermuda National Gallery to create an exhibition highlighting the environmental damage caused by single-use plastics.

Her one-woman show, Flotsam and Jetsam: The Cost of Modern Living, featured a series of images composed from discarded plastic that had washed up on Bermuda’s shores.

And after producing a series of limited edition prints for sale, Ms Andrews was able to donate $15,000 each, to the gallery and environmental charity Keep Bermuda Beautiful.

Ms Andrews told The Royal Gazette: “I’ve been working with plastics for the last eight years.

“When I moved back to the island eight years ago, I started just picking up the plastic and it came to a point where I was collecting it and then I started to see it as material.

“It’s really evolved since then and I would say this work is the high point of that. What we try to do with this is elevate the trash and really let the material sing and so by presenting them this way took it to the next level.

“It was the BNG that facilitated the show. They helped me conceive how we were going to do it and keep me on track with the work and then do these beautiful prints, so the process of doing a show with them was fantastic.“

“KBB has always been instrumental in my work. They have supported me, I have supported them – it’s great. We would be nothing without each other so it was a very natural fit.

“I am a passionate advocate for environmental protection and preservation, especially our oceans. Bermuda’s unique position in the Atlantic makes our island a huge catchment for swathes of ocean plastics that become trapped in sargassum and wash up on our beaches every day.

“It makes for a plethora of material to work with when I am creating my artwork, especially collections that are aimed at raising awareness to combat this problem, here in Bermuda and around the world.

“Donating part-proceeds from the exhibition was one small way that I am able to give back to two phenomenal local charities who are battling the ocean pollution epidemic and making a difference throughout Bermuda and beyond.”

Peter Lapsley, the executive director of the BNG, said: “We wanted to create an exhibition that shows awareness for ocean plastics and single use plastics in a visually stunning way.

“What came out of that was a conversation between ourselves and KBB to look at a way we might be able to create some sort of fundraising opportunity.

“While the works describe a really terrible issue and a terrible problem that we have in the environment here, they are also beautiful artworks that encourage people to think about it.

“The opportunity to use art to shine a light on the important issues of our time is a critically important role that BNG plays in the community.

“The chance to collaborate with an artist of Meredith Andrews’ calibre and KBB, which is doing such good works throughout the community, is a best-case scenario for BNG.

“Meredith’s photography has won international awards and when you see these particular works, you will immediately understand why she is such an acclaimed artist.

“Meredith also brings a generosity to the way she approaches her work, which is so important.

“I am also struck by the fact that an individual artist has created such sizeable support for two charities, which I hope inspires others to develop innovative ways to support and work with the local non-profit sector.”

Marcia Browne, vice-president of the KBB board, praised Ms Andrews’ generosity and the support of the general public.

She said: “On behalf of KBB, we would like to thank Meredith for her ongoing efforts to make the public aware of how everyday plastics are polluting Bermuda’s beautiful coastline, endangering the delicate marine environment and choking the world’s oceans.

“Meredith is a good friend to KBB, and we are extremely grateful for her generosity in sharing the proceeds from this award-winning exhibition.

“We appreciate BNG for their collaboration and significant efforts with this special fundraising project, and thank members of the public for their tremendous support of the art exhibition.

“Together, we have produced phenomenal results, all whilst promoting KBB’s mission to reduce waste and beautify Bermuda through action and education.”

Prints of the award-winning photographic series, numbered and signed by the artist, are available to purchase for $250 at the BNG’s website. They come unframed and sized 16in by 20in.