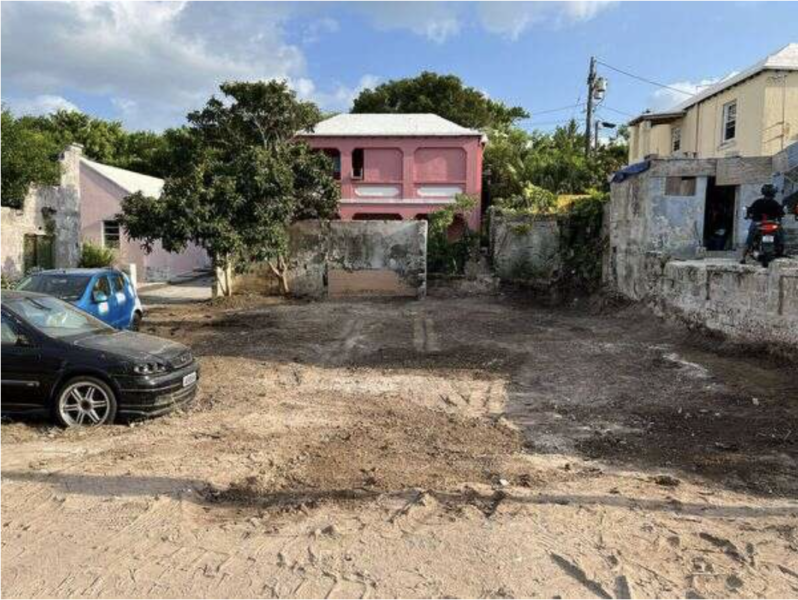 Tonnes of waste were cleared from an empty Pembroke lot as part of a community effort to improve a Curving Avenue neighbourhood.

Traci Burgess, executive director of Keep Bermuda Beautiful, said more than 110,000lb of waste, debris, trash and recyclables were hauled from the King’s Court plot over the course of a three-day clean-up this month.

“I was informed that this issue of illegal dumping in the area had been taking place since the late 1990s.”

She said the clean-up came as a result of a call from Curtis Dickinson, the Member of Parliament for the constituency, which the charity felt was a natural fit for its We Love Our Neighbourhoods initiative.

Mr Dickinson said residents had complained that the empty lot had become a dumping ground, so he called KBB — along with Ascendant Technology Ltd and Wilmot Trucking — to address the issue.

“We just pulled it all together,” he said. “We had the neighbours, we had professionals. My wife came out and members of my constituency came out.

“It was a really good gathering of people who pulled together for the neighbourhood.”

Tyrone Butterfield, of ATL, said they were happy to take part in the clean-up effort.

“We got the shout-out that they wanted to do King’s Court and when I saw what it looked like, I could tell it was going to take some real machine work to get it done.

“We helped out in another area in Deep Dale, so we knew what we would be dealing with,” Mr Butterfield said.

“Because we live in the neighbourhood and we are products of the community, we try to give back what we can.”

Paul Wilmot, of Wilmot Trucking, said the business has a history of community service, adding: “We are committed to helping those in need, and King’s Court is one example of a big need we were able to help meet.”

Along with thousands of bottles and household waste, the volunteers discovered a handful of old phones, shoes, a treadmill and a boat that had been broken in half in the lot.

Ms Burgess said: “To find an abandoned boat that has been broken in half in the middle of town … it’s not even near the water, so someone moved it there on purpose.

“That’s illegal dumping and it is a punishable offence that can carry imprisonment or fines.”

With the lot now cleared, Mr Dickinson and Ms Burgess said discussions were under way about the next steps for the site.

“We have a general idea of what the neighbours want for that space, and based on that we took some measurements and met with some landscapers and gardeners to start pulling quotes together,” Ms Burgess said.

“Once we have a general consensus of what the neighbourhood wants to transpire, we can put a budget together and then start to fundraise.

“Hopefully it will be completed before the end of the year — I see this as a Q4 project that over the next couple of months we can have installed and completed.

“Once we finish King’s Court, we would identify another project centrally located, and at some point early in the new year put out a call to the entire community to tell us what neighbourhoods in their parishes need attention.”

Mr Dickinson added: “There are other areas in the constituency that we are going to focus on now that this is out of the way.

“For me, this has been a bit of a prototype of the model. The Government can only do so much, but the power of the community and the power of bringing people together for a common cause can make a difference.”

Cassandra Trott, who lives in the area, said she was pleased and grateful for the hard work done to clean up the area.

“Mr Dickinson made us a promise to clear this land out and proved he is a man of his word,” she said. “He brought the team together to make this project happen. We as a community couldn’t be happier.”