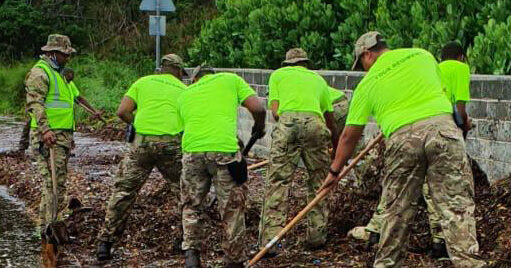 Bermuda is littered with hazards after a hurricane, from fallen trees in the road and live wires lurking under piles of debris to buildings that could collapse at any moment and cliffsides that could fall into the ocean.

After a storm, Belco workers hit the streets from sun-up to late at night, repairing infrastructure such as branch lines so that power can be restored to our homes. Safety is paramount for the clean-up teams charged with the responsibility of putting the island back together. Belco staff and soldiers from the Royal Bermuda Regiment are rigorously trained so that they are aware of all the post-storm dangers and can go about their jobs as safely as possible.

“Belco crews face dangers from obstacles in the road and debris that may fall during restoration efforts,” says a Belco spokesperson. “Crews also face dangers from generators that may be connected to a home or business’s main electricity panels that can energize a line that workers believe to be de-energized.”

The safety of staff is “first and foremost” in Belco’s plans. The spokesperson explains that Belco crews are highly trained and follow precise checklists to ensure safety during restoration efforts. They also undergo regular training to ensure they are up to date with all safety protocols.

Step one is to ensure the weather is calm enough for workers to venture outside and check the lay of the land. “Immediately following a storm, and once winds have decreased and it is safe to venture outside, an advance crew goes out to assess damage and any potential obstacles to Belco vehicles and crews,” the spokesperson says. “Once the advance crew has assessed accessibility and damage to infrastructure are repair crews dispatched in a coordinated manner to address damage according to a pre-planned strategy.”

Restoration efforts are coordinated from the central dispatch at Belco’s headquarters on Serpentine Road. Belco works alongside other members of the Emergency Measures Organization (EMO), which includes the Bermuda Police Service and the Regiment. Police and the Regiment check roads for obstructions following a storm and report back to Belco when they encounter downed power lines and other damaged infrastructure.

Major Duncan Simons of the Regiment says the biggest threats to soldiers are downed power lines and chainsaw accidents. “We conduct annual chainsaw training or refreshers for all chainsaw operators to mitigate this risk, and we organize a yearly brief with Belco to ensure soldiers are cognizant of the risks,” Major Simons says.

“In the case of downed lines, we report pole numbers through our operations room and Commander of Operations and wait for the all-clear when the lines have been deactivated.”

Workers from the Bermuda Government also play their part in clean-ups, once the EMO has confirmed winds have subsided and it’s safe for them to get out and about. A Parks Department spokesperson says staff include instructors who are trained and certified to provide CPR, use automated external defibrillators (AED) and first aid. They carry fully stocked first aid kits on the trucks that can be used if required. The higher certified staff will also have AEDs and oxygen,” he says.

Another group that springs into action after a storm are the volunteers at Keep Bermuda Beautiful (KBB).

Executive director Traci Burgess says teams are strongly encouraged to turn their attention firstly to their own property and neighbourhood, meaning adverse weather conditions have long since subsided by the time they begin clean-up operations at public beaches and parks.

The fierce winds of a hurricane often cause serious damage to Bermuda’s landscape, causing beach erosion and areas such as cliffsides to become unstable. “There’s debris and damage to roads, there could be cliffsides falling off,” says Burgess. “When it’s safe to go, our volunteers head up to spots like the Railway Trail, where there are cliffs and rocky areas. We caution them about not overdoing it. They might see some trash tangled up in the trees, but you might have to walk along rocks to get there.”

Don’t take any risks. “We want to make sure our volunteers are working in the safest way possible. We discourage people from walking along any dangerous routes like cliffs.”

Volunteers must also watch out for storm surge as they clear the beach. “We talk about water safety when they’re on the beaches,” Burgess says. “We tell our volunteers not to go too far, especially on the South Shore.”

SHOW YOUR APPRECIATION FOR CLEAN-UP CREWS

We may feel we have enough on our plates dealing with the hurricane aftermath in our own homes, but we should always spare a thought for the teams on the front line. One way to show your appreciation is simply to stay out of the way while they go about their work. “Belco staff work long shifts, often in stifling heat and humidity following a storm,” says a spokesperson. “Work carries on from sun-up to sundown until every customer has had power restored. Staff are often away from their families and homes, which may require repairs and clean-up, too. The public can show their appreciation by keeping out of the way of crews as they work and by offering their thanks and encouragement.”

“We’re thankful to all our volunteers for the great work they do,” adds Burgess. “That includes those who volunteer after a storm and all our other volunteers and partners. They have a strong emotional connection to helping keep Bermuda beautiful.”

You can make a donation, become a member or provide sponsorship.  It is quick and easy.  Simply use your credit card.  We are also happy to receive online payments or a cheque in the mail. Butterfield Bank customers can now select KBB from the vendor list and make a donation.