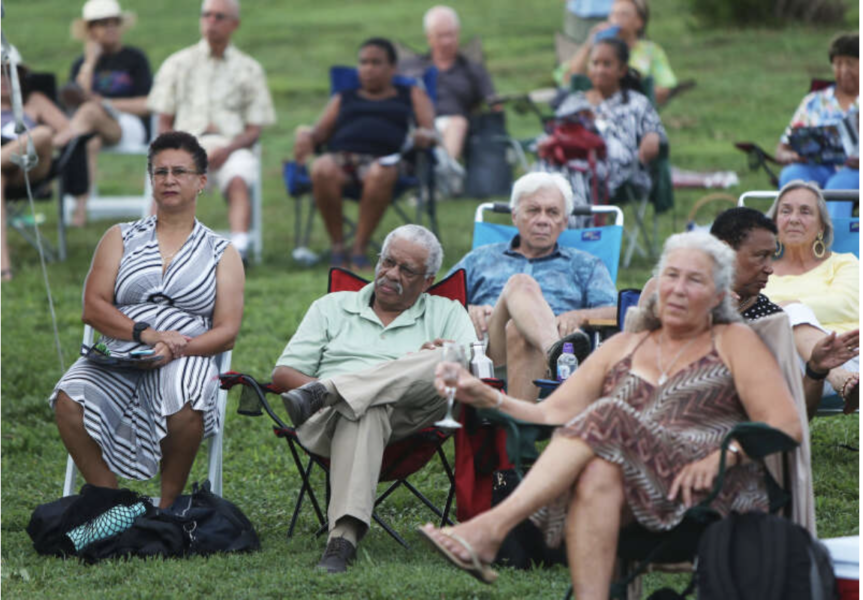 The life and work of a visionary environmental campaigner who strived to challenge the status quo was celebrated at a ceremony in Warwick on Saturday.

Hundreds of friends, colleagues and supporters of Stuart Jackson Hayward gathered at the Riddell’s Bay Gardens and Nature Reserve for an evening of music, poetry and tributes to a man described as someone “who marched to the beat of a different drummer”.

Mr Hayward, who died in June at the age of 80, set up and led the Bermuda Environmental Sustainability Taskforce, a campaign group created to protect the island’s natural environment from the threat of increased development at a time when it was not fashionable to do so.

He worked as a teacher, musician, author and journalist, and also served as an independent Member of Parliament in the early 1990s, where he brought environmental issues to the fore of public debate and consciousness.

Saturday’s tributes were led by David Wingate, the conservationist responsible for reviving the fortunes of the thought-to-be-extinct cahow in the 1950s.

Dr Wingate said: “Every so often a person comes along who is destined to change the mindset of an entire generation. I believe Stuart was one such person.

“His career and influences were extraordinarily broad. I believe his biggest influence was in helping to bring Bermudians together to close the racial gap.

“He did this in the best possible way – by example, and by his love of everything and everyone Bermudian.”

“Stuart was never reluctant to ask all the questions we all wanted to ask,” Mr Barritt said.

“Why? Well if not why, why not? He had a passion for disassembling problems and challenges and then reassembling them in a way that would benefit the wider community in Bermuda.”

Mr Barritt said that he struck up a friendship with Mr Hayward when they were youngsters “because both of us were keen at that time to give voice to different voices”.

Mr Barritt added: “But Stuart was more than that. He was a man for all seasons. He was prepared to challenge the way things worked.”

Further tributes were given by Jennifer Gray, Frances Marshall of BEST, and Mr Hayward’s sister, Sylvia Hayward-Harris, who described her brother as “my knight in shining armour, my wizard, my angel”.

“Ms Hayward-Harris said: ”He believed in fairness, conscientiousness, justice, and he had the ability to inspire all those who believed in the same thing to join with him.“

Describing her brother as “a firebrand” who would later become “wise and diplomatic”, Ms Hayward-Harris went on: “His belief was, it didn’t matter if you complained, but if you wanted to complain, you needed to do something about it.

“That was his greatest strength – to take your complaint and what your idea should be and bring it to fruition.”

Mr Hayward’s ashes are scattered among the grounds of the Riddell’s Bay Garden and Nature Reserve, part of which have been named in his honour.