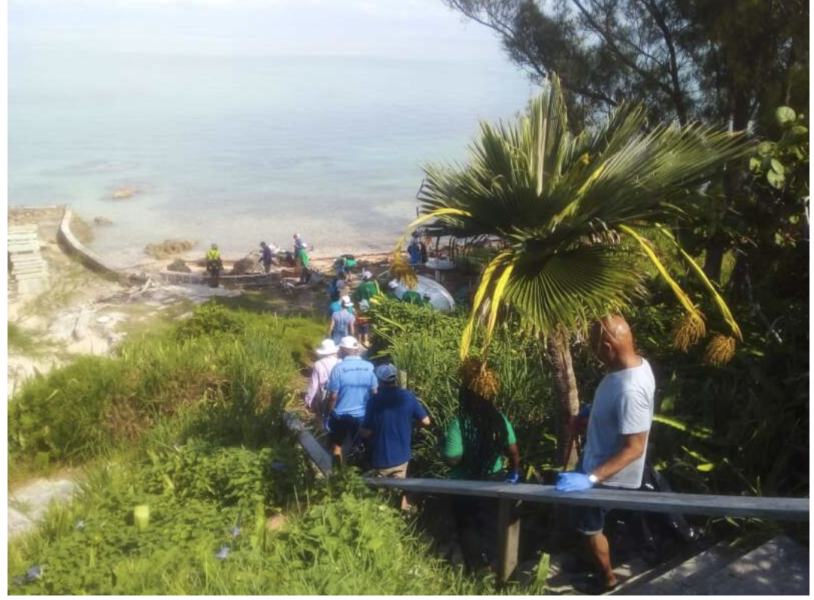 A landmark project to save vital mangrove forests from further degeneration has moved a step closer after a botanist spearheading the plan visited the island.

Christopher Puttock was part of a delegation of more than 200 members of Rotary groups from North America who visited Bermuda last week.

After an inspection of mangrove forests, Dr Puttock said that he will push to get funding from Rotary International so that the project can move ahead.

Dr Puttock said: “I now know exactly the sort of things that need to be done for the mangroves to survive. We can build a project around what I’ve seen.”

He added that invasive species such as Mexican pepper and casuarina trees were strangling the mangroves and needed to be removed.

“The black mangrove is being hammered by the Mexican pepper,” he said.

He added that walkways could serve a dual purpose by diverting human traffic away from the fragile forests, while also providing a barrier against invasive species.

Dr Puttock said that the project could cost more than $100,000, and that funding could be provided by Rotary International.

Dr Puttock first mooted the plan last month before he had visited Bermuda. Following last week’s inspection, he said: “It should be done straightaway — we shouldn’t wait any longer.

“Whatever budget we can come up with, Rotary International will make the match.

“He said: “If we don’t act now, what we’re going to see is further damage and further loss of an essential ecosystem.”

The project is the brainchild of Marty Schulman, the governor of the New York branch of Rotary, of which Bermuda is a member.

Mr Schulman, a frequent visitor to the island, said that Bermuda was a prime location for Rotary funding because of its infrastructure. The organisation has secured the support of the Keep Bermuda Beautiful to ensure that funding is backed up by manpower.

The New York branch also has close ties to Bermuda’s affiliates — Andrew Roberts, a former head of the St. George’s chapter, was appointed assistant governor of the New York district earlier this year.

“I took it upon myself to promote this as a project, but I could never have done it without the help of Andrew and his team.

“Choosing Bermuda was not an accident. It was intentional because it has a wealth of talent — organisations such as KBB who are willing to put their efforts into this — where their heart is. It has been an enlightening experience.”

On Saturday visiting Rotarians from chapters across the US and Canada teamed up with KBB volunteers to clear trash from Lagoon Park and Glass Beach in Sandys.

Mr Schulman said he hoped that the Bermuda pilot project would be adopted by other Rotarian groups across the world.

He said: “This was a collaborative effort. Rotarians were digging in the mangroves today and saw what KBB does for Bermuda. The question is, how can we start this initiative elsewhere?”

According to Traci Burgess, the executive director of KBB, about 2,600lb of debris — including bike parts — was picked up during Saturday’s clean-up.

Ms Burgess said: “It looks like the public have been using Lagoon Park as a dump site.

“Our mission is to reduce waste and eliminate litter in order to beautify the island. Our main work involves beach clean-ups but the mangroves are more about conservation, preservation, and revitalisation, because of the important role that mangroves play.

Ms Burgess said that Bermuda’s location made it a magnate for trash dumped throughout the Atlantic region.

“Because we’re the only landmass in a massive body of water, we attract everything,” she said.

“It comes across from Africa, it comes down from the UK, the north east US, Canada and the Caribbean. It all catches in Bermuda and it’s having such a devastating impact on our island.

“Globally, ocean pollution is such a huge problem and we have to focus on it.

“We’re not experts but we are advocates who can take action. It’s an honour for KBB to be invited by the Rotary organisation to be a part of this project. When we collaborate and combine our resources, we can have an impact.

“This project is critically important. Humans have done so much damage to our only resource — the Earth — that if we don’t start taking drastic steps now, our children and grandchildren are not going to inherit anything because we and our forefathers have stripped everything.”